Cowboys news: How the Cowboys can work around the absence of Amari Cooper 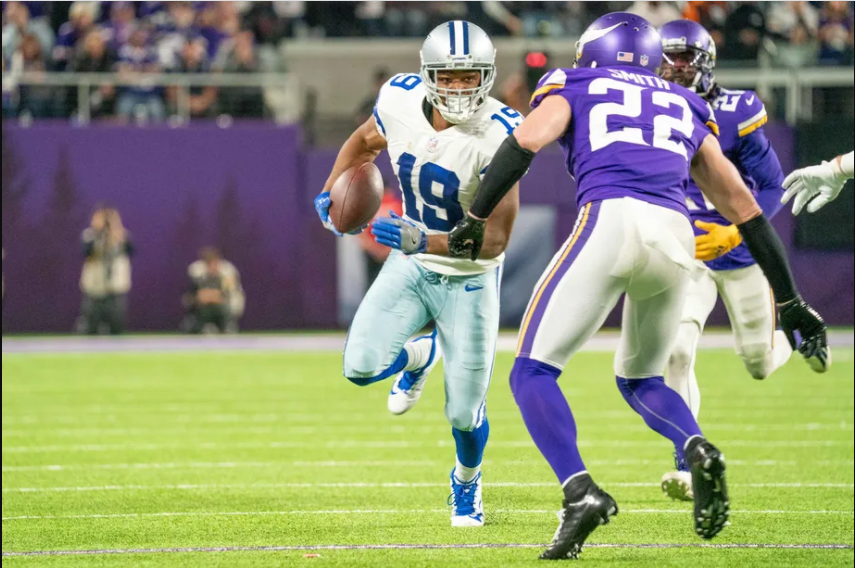 The Cowboys offense will need to work around the absence of Amari Cooper.

So how will coach Mike McCarthy and offensive coordinator Kellen Moore adjust the Cowboys’ league-leading offense on such short notice?

Lamb will obviously get even more targets. And last week’s return of Michael Gallup from a seven-week injury absence comes at a perfect time. But the Cowboys have the luxury of several options to help fill Cooper’s void.

First and foremost, Cedrick Wilson – who could start for every team in the NFC East – will get more snaps and likely more passes thrown his way in the midst of his career-best year with 19 catches, 280 yards and three touchdowns. No. 5 receiver Noah Brown also has 100 yards receiving this season.

If the Cowboys want to get creative, they have two reliable tight ends in Dalton Schultz and Blake Jarwin and a breakaway back in the screen game named Tony Pollard.
The loss of Cooper is a significant. But as the Cowboys have already proven, their depth could turn what looks like a mountain into merely a molehill.
Dallas Cowboys WR Amari Cooper out two games after positive COVID-19 test, sources say – Todd Archer, ESPN.com
Why can’t we have nice things?
FRISCO, Texas — With three games in a 12-day span starting Sunday against the Kansas City Chiefs, the Dallas Cowboys will be without wide receiver Amari Cooper for at least two of them after he was placed on the reserve/COVID-19 list Friday.
Sources told ESPN that Cooper tested positive for COVID-19 and is unvaccinated, which mandates a 10-day quarantine and will knock him out of the Thanksgiving game against the Las Vegas Raiders, his former team.
Cooper should clear the protocols in time to play against the New Orleans Saints on Dec. 2.
Sources said the Cowboys have not had any other coronavirus issues related to Cooper’s test. The Cowboys will fly to Kansas City after practice Saturday.
Cooper has caught 44 passes for 583 yards and five touchdowns this season, all of which rank second on the Cowboys.
The Cowboys welcomed back wide receiver Michael Gallup to action in last week’s win over the Atlanta Falcons after he missed seven games with a calf strain suffered in the season opener. Gallup and CeeDee Lamb will serve as the Cowboys’ top two receivers with Cedrick Wilson moving into the No. 3 slot, which he handled during Gallup’s absence.
Earlier in the season, linebacker Keanu Neal, who is also unvaccinated, missed two games on the reserve/COVID-19 list. Kicker Greg Zuerlein will return to the roster this week after spending last week on the reserve list.
Cooper’s loss is part of some potential movement on the Cowboys’ offense this week.

Cowboys O-line audible: Connor McGovern to start at left guard vs. Chiefs, Connor Williams on notice – Patrik Walker, CBS Sports
No Amari Cooper and a switch at left guard.
When the Dallas Cowboys take the field against the Kansas City Chiefs on Sunday afternoon, all eyes will be on Dak Prescott and Patrick Mahomes. It’s what will happen in front of the former that might raise some eyebrows though, with the Cowboys looking to make a change on their offensive line they hope will give them a better chance at stealing a victory at Arrowhead Stadium. Connor Williams, the team’s resident starter at left guard, will be replaced by Connor McGovern, a talented former third-round pick who has been quietly improving in the background; and in a game that will likely see the return of All-Pro left tackle Tyron Smith.
The swap at left guard is a significant development for the Cowboys, and particularly for Williams, who is playing in the final year of his rookie deal and entered the 2021 season hoping to increase his value in Dallas. Instead, Williams was forced into a preseason experiment at center that was a complete failure before being moved back to left guard — playing mostly well to this point.
His Achilles heel, however, has been penalties that have routinely either killed drives and/or put the Cowboys offense in position to nearly lose critical games (e.g., in Week 6 against the New England Patriots). To date, Williams has been flagged for 10 penalties for a total of 110 yards, league high numbers in both categories, eight of them being holding calls. For contrast, his 10 flags are more than twice as much as center Tyler Biadasz (4), who is in only his second NFL season and four more than Terence Steele (6), who is also in only his second year and despite having been thrust into the starting role at right tackle during the five-game suspension of La’el Collins.

Keys To Victory: Cowboys Have To Control Tempo – Bucky Brooks, DallasCowboys.com
How can the Cowboys pull off a road win in Kansas City?
The Cowboys will win if…
The Cowboys must control the tempo of this game from start to finish. Dak and Co. need to bring their A-game, as Mike McCarthy counts on the offense to pick up first downs and touchdowns while operating at a deliberate pace to drain the clock and limit the total number of possessions in the game. Ezekiel Elliott and Tony Pollard need to get it done on the ground for the “keep away” plan to work, but the odds are in their favor against a Chiefs’ defense that has struggled for most of the season.
Defensively, Dan Quinn must help his young defenders understand the importance of keeping the ball in front of the defense. The Chiefs are a big-play offense with the capacity to put 20-plus points in a quarter when Patrick Mahomes gets into a rhythm and is able to push the ball down the field. The secondary must stay on top of the Chiefs’ perimeter weapons and force the impatient passer to settle for dump-offs and check-downs throughout the game. If Mahomes is unable to throw it over the top of the defense, the Chiefs’ offense could unravel with their star players turning the ball over while attempting to make highlight plays instead of opting for a conservative approach on game day.

Tyron Smith’s Practice Status Upgraded – Johnny Auping, DallasCowboys.com
Tyron Smith is making good progress toward playing.
Tyron Smith will make a big step forward in Friday’s practice, potentially improving his chances of playing Sunday against the Kansas City Chiefs. Mike McCarthy stated that Smith would participate in the mock game portion of Friday’s practice after having been limited to individual drills during Wednesday and Thursday practices.
The All-Pro left tackle has been dealing with bone spur issues in his ankle for the past two weeks, and McCarthy had stated earlier this week that the training staff and coaching staff would evaluate Smith after his limited participation in practices this week to determine what his participation would be the rest of the week and ultimately decide if he would be available on Sunday.
McCarthy said that he spoke to Smith after Thursday’s practice.
Mike McCarthy: Final Prep For KC; Injury Updates
“He looks good,” McCarthy said of Smith’s week thus far. “He has felt good about his work.”

Elena is looking for an opportunity to use his skills and experience to make a positive impact on business,lifestyle,health. He has a vast amount of knowledge and expertise in the field, which he gained through years of hard work and dedication. Elena is extremely passionate about these, and he wants to share his love and knowledge with others.

The McCarthy Chronicles: Cowboys send a message indicative of their championship culture

What is the Most Popular Outdoor Sport

Analyzing the Steelers Week 11 loss to the...